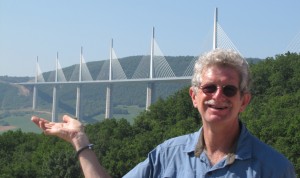 In summer 2013 I visited the Millau Viaduct, which in 2004 replaced a traffic bottleneck on one of central France’s main highways with an amazing piece of design and engineering that’s become a tourist attraction. It was designed by Norman Foster, architect of so many beautiful green buildings.

From a distance, it looks like an insect-like giant spaceship that landed a few minutes before. As we drove its curving path, we could see the bridge ahead of us. All the structure is between the two roadways, so it feels open on the sides. It was built in four years.

I found this so inspiring, especially amid the dreary mind-set that our state/country/world/human society are unable to do what we need to do to to avoid heading toward catastrophes. You can read about it on Wikipedia And for some humbling perspective, read about the Lascaux professional artists in caves 18,000 years ago, or the closest thing to Millau, the nearby Pont du Gard, built 2,000 years ago with an almost unimaginable engineering precision to transport water.