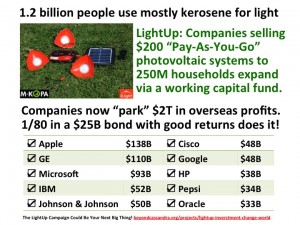 From Daniel Kammen and Felix Kramer, who hope to engage you in an effort to transform energy access around the planet, and open up a new avenue of corporate impact investing. We are pleased to present to you: LightUp.

How could a billion people now without electricity light up their world, improve their health, and join the global economy by 2020? With LightUp, they could buy, and pay off in under two years, small photovoltaic solar panels with batteries that power LED lights and charge phones, for less than they now spend on kerosene.

Established firms would scale up production and sales from hundreds of thousands to hundreds of millions of units through a new working capital bond fund. LightUp’s campaign aims to spark that first beyond-business-as-usual investment, at competitive ROIs, from one or more US companies, with less than 2% of current unrepatriated profits.

When we run this by people, they say, “Wow! The poorest people in the world could be the first to go carbon free for lights!” and “This could actually happen!”

TRYING OUT THE CONCEPT

In September, we presented our idea informally to individuals and audiences at Climate Week in New York. And in media, in Huffington Post, we asked, “Did We Just Find a Cool Trillion Dollars for Green Energy Projects?“  . Then, in the  Guardian, we suggested “How a single multinational corporation could light up the world”  .

Now people ask us, “What’s next?” We’re starting by building on our own strengths and networks to create a campaign.

Dan says, “I’ve spent my entire professional life researching and analyzing practical solutions to address climate change — and exploring them with students and the public. While at the World Bank and since, I’ve been on the ground as technologies arrive around the world. We’ve developed effective infrastructures to produce, distribute, and rapidly scale renewable energy technologies and systems.”

Felix says, “Our CalCars.org campaign to get carmakers to build plug-in hybrids inspired people and showed what’s possible with existing technology. Once we decide to do it, the world can leave fossil fuels behind, while improving life for everyone. LightUp will entice companies to blaze that trail with a bold and responsible step: investing some of their surplus resources in world-changing solutions.”

GETTING TO OUR GOAL

We aim to fast-track this idea from project to campaign, to success: a public announcement from one or more companies well before next year’s Paris Climate Conference in December 2015.

The first responses from companies we’ve approached informally have been daunting — but not discouraging. They see some risks for investors and complexities in rapid scaling. But no one tells us we’re wasting their time.

Our timing couldn’t be better: The Nobel Prize for Physics just went to the inventors of the blue LED light. LightUp could have written the award statement: “The LED lamp holds great promise for increasing the quality of life for over 1.5 billion people around the world who lack access to electricity grids: due to low power requirements it can be powered by cheap local solar power.” And it’s a great lead-in to 2015, which the UN and a broad consortium of partners have declared “The International Year of Light” — using lighting technologies for sustainable development

We will build awareness, gain supporters and endorsers, and enlist partners and intermediaries. Though nothing here is unknown, we may need a brief proof-of-concept demonstration project. We’ll be bringing on advisors and working to understand how US companies decide how to invest their overseas resources, and the returns they get

WE CAN USE YOUR IDEAS, CONTACTS, AND HELP SPREADING THE WORD

We’ll start by recruiting an energetic person looking to jump in to the Next Big Thing to coordinate our efforts. See the description at What’s Your Next Big Thing? It Could be LightUp! Please send us candidates, suggestions for strategies, names of people to approach who will want to hear about LightUp — and stay tuned.

Thanks in advance for believing we can actually change the world quickly — and for acting on that belief!