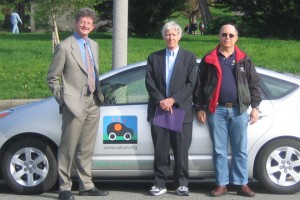 Lester Brown, founder of the Worldwatch Institute and founder and President of the Earth Policy Institute, one of the most influential environmentalists, just turned 80. In his 50 years, he’s done everything, and written so many important books. He is being celebrated at a party on April 11, 2014.

Here’s the guestbook-Festschrift page where people are posting their memories and tributes. So many are worth reading! Among them are my modest contribution:

Thanks, Lester, for decades of dedication — and for never giving up!

For a long time, I admired and learned from Lester, especially from State of the World and other reports for a long time. But about 10 years ago, a few years after I’d become a full-time advocate for plug-in hybrid cars, I saw that he had become one of the first environmental leaders to support plug-in cars. He was then one of the first to connect the ideas of expanding wind power with powering cars.

Then I was delighted when the Plan B 2.0 included, “Moving to these highly efficient plug-in gas-electric hybrids could cut U.S. gasoline use by 85%. Even more important, it could cut automobile carbon emissions by some 85%, making the United States a model for other countries.”

And then as the powerful analyst who always put global food supplies at the top of his concerns, he was so effective in making the case that vehicle electrification was a more promising near-term strategy than liquid biofuels.

It was great to finally meet him in February 2006, when he came out to California. We offered him a ride in the first Prius that CalCars converted (by adding a larger battery and electronics to “fool” the car’s computer into welcoming more electric power). And the photo of him with me and Ron Gremban, CalCars’ Technology Lead, became the first picture we put on a page http://www.calcars.org/photos-… featuring “influencers & celebrities” with our fleet of conversions. (Later additions included Al Gore, Steve Schneider, George Shultz, Maria Shriver, Denis Hayes, Andy Grove, Stephen Schneider, Michael Brune and many others.) Since then, it’s been great to keep him up to date on plug-in trends, and run other ideas by EPI staffers

These days, having declared victory on the initial goal of getting carmakers to mass-produce and sell PEVs, I’m exploring a range of projects related to climate change. One is “How Do You Keep Going?”  to interview longtime advocates whose activism in some way involves climate. We will ask them: “Given all you’ve lived through and all you know, what sustains and motivates you to keep at it?” If we get this project off the ground, Lester will be one of the first high-profile leaders we would approach. We’re starting by reaching out to interviewers; we will then post video and print interviews, invite anyone to submit their entries, curate the result, and produce anthologies, ebooks, etc.

I’m looking forward to celebrating Lester’s decades of contributions to the insight, strategic wisdom, and human connections we all need.